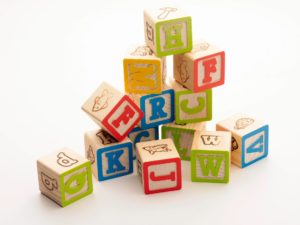 As with any profession, law has its share of abbreviations and acronyms. Sometimes as law professionals, we see them so often it’s easy to forget that not everyone knows what DM or EIC stands for. So we figured we would share a glossary of a few of the more commonly used family law acronyms.

This includes mediation, collaborative divorce and any other non-litigious means of resolving family law disputes.

This one would not be used in official paperwork but a client could potentially come across it in an attorney’s handwritten notes or messages. The triangle is the Greek symbol for Delta or the letter D for Defendant.

During an initial divorce consultation one of the primary questions is “any minor children involved?” This is important because the DM is typically more involved in terms of custody, parenting time and support than a DO (see below.)

DO – Divorce Without Minor Children

This refers to a divorce that does not involve minor children.

This is one of the Judge’s considerations when determining child custody. According to Michigan State Legislature Section 722.27, “The custodial environment of a child is established if over an appreciable time the child naturally looks to the custodian in that environment for guidance, discipline, the necessities of life, and parental comfort.”

According to the Oakland County Circuit Court website, “After a Complaint for Divorce is filed in Oakland County, the parties and their counsel are directed to appear at an Early Intervention Conference (EIC).  This mandatory meeting is held at the FOC Office before the assigned FOC Referee.  The referee conducts a review of the case status, provides the parties information about the divorce process and then directs them to the co-parenting class known as “SMILE” also held in the FOC Office immediately following the conclusion of the EIC.”

FOC – Friend of the Court

The Livingston County Circuit Court website describes the FOC responsibilities as, “To conduct an investigation and make recommendations to the Court regarding:

“An IME is supposed to be an objective assessment of your medical condition, including what treatment you need, whether you have a permanent impairment and to what degree, and your ability to work in the future,” according to a NOLO article, “What is an Independent Medical Exam and How will it affect my workers’ compensation case?”

An IME could be recommended in divorce, custody or guardianship cases to determine someone’s ability to work or care for themselves or others.

This court order, signed by a judge, officially dissolves the marriage. The JOD determines the terms of the settlement including custody, division of assets and parenting time.

This procedural term is used frequently in law practice to verify that involved parties are notified of upcoming court appearances.

The attorney for the other party.

This refers to the child custody and visitation time defined by the JOD.

As with the triangle for Defendant, the Greek pi symbol represents the P in Plaintiff.

When a party is served a subpoena, the courts require a proof of service to show that the person involved is aware of their responsibilities in the case.

This document outlines the division of marital retirement or pension funds in a divorce.

Sole physical or legal custody is becoming increasingly rare in modern divorces. Most Southeastern Michigan judges tend to adhere to the belief that children are better off with the influence of both co-parents unless there are extreme circumstances involving abuse or untreated addiction.

Following the rules outlined in the Michigan Child Support Formula, the USCO is the official record of the court’s child support determinations.

Unlike child support determinations, there is not a universal spousal support formula that applies to all cases. A judge takes into account the length of the marriage; health, employment and education of both parties; childcare needs; and many other factors when determining how much and how long alimony is paid.