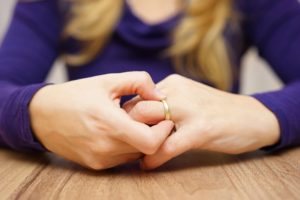 Every plaintiff in every divorce has a last straw. That moment when they realize their health or sanity is at risk if they stay any longer. Sometimes the arbitrary line in the sand makes sense – like putting a child in danger or getting physical. But sometimes, there is so much wrapped up in surviving in a functional household, that the divorce decision may seem inane to outsiders.

Deciding to divorce a functional alcoholic or someone with mental illness is not easy. The marriage dynamic is often fraught with co-dependence and enabling. The spouse asking for the divorce may go through intense feelings of loss and guilt. Family Law Attorney Kathryn Wayne-Spindler and her team have handled enough divorces involving alcohol abuse and untreated mental illness to know what to expect.

“We find that the spouses of functional alcoholics feel the need to do a lot of explaining, justifying and apologizing for their decision to divorce. It’s almost as if they feel they are the one letting down their spouse and not the other way around,” said Kathryn Wayne-Spindler.

On the surface, functionally alcoholic spouses can “control” their drinking so they may be viewed as strong in comparison to their full-blown alcoholic brethren. So the divorcing spouse may feel the need to dig up every instance of inappropriate behavior to justify the need to get out.

“Feel free to send us every drunken text. We will use it in your case. But you do not have to try to convince us. We have seen functional alcoholics and we can appreciate the silent damage their habits inflict on loved ones,” said Wayne-Spindler.

The other aspect of divorcing someone struggling with mental illness or addiction is concern for their safety. Some people worry that the loss of the spousal support system may cause their spouse to slide further into self-harm. It is a possibility. But as many counselors would say, that is not the supporting spouse’s responsibility. Only the alcoholic can alter his habits no matter what life circumstances he or she is enduring.

Decision to Divorce and Child Custody or Supervised Visitation

“The thought of divorcing an alcoholic is terrifying for so many reasons, but when one has children, it can be paralyzing,” writes Lisa Frederiksen in her article, “Fears for Children When Divorcing an Alcoholic.”

When it comes to the decision to divorce a functional alcoholic or someone with mental illness, another concern might be the children’s welfare. Kathryn Wayne-Spindler strongly recommends against going it alone when filing for divorce in these circumstances especially where kids are concerned. “As an attorney who has practiced family law for more than 20 years, I know all the in’s and out’s of drug testing protocols, mandatory treatment, protection orders and supervised visitation.”

We are sensitive to the unique needs of both spouses involved in a functional alcoholic divorce. When representing the habitual drinker, we may suggest rehab. Even if it doesn’t save the current marriage, it can be healthy to kick bad habits when embarking on a big life change like divorce. Counseling, family connections and medical help may fill some of the support roles formerly occupied by the spouse. For those who had been keeping their drinking in check, the trauma of a divorce could drive them toward increased consumption. Joining a support group may encourage better habits and coping skills resulting in less drinking. We also strongly recommend therapy for those who suspect mental illness may have contributed to the breakup. Some people voice concerns that their custody could be impacted by admitting an addiction or mental illness. We believe that acknowledging the challenge and seeking a resolution will go farther in the courts than trying to hide a problem and being found out later. As long as the children’s safety and health is the top priority, we believe strongly that both parents should be involved in co-parenting and will fight for our clients’ visitation rights.

For all divorces involving functional substance abuse or mild mental illness, the experienced divorce attorneys at Kathryn Wayne-Spindler & Associates put clients at ease. Because we’ve helped so many clients in these situations, we have seen it all and heard it all. Contact the Milford, Michigan law office of Kathryn Wayne-Spindler & Associates at 248-676-1000 for assistance with a divorce or separation. We handle cases throughout Southeastern Michigan including Oakland, Wayne, Livingston, Washtenaw and Genesee counties as well as Clare, Gladwin, Ogemaw and Roscommon in mid-Michigan. Our attorneys help clients in Milford; Highland; Hartland; Commerce; Waterford; Wixom; White Lake; Walled Lake; Linden; Grand Blanc; Holly; Flint; South Lyon; New Hudson; Howell; Brighton; Clare; Houghton Lake; Higgins Lake; Gladwin; and many more Michigan communities.